Posted on July 26, 2012 by forwardtranslations 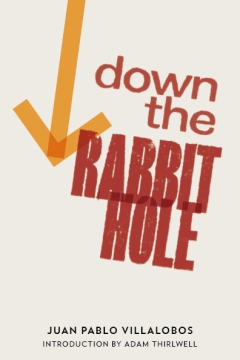 Down the Rabbit Hole by Juan Pablo Villalobos, tr. Rosalind Harvey (And Other Stories, 2011)

Down the Rabbit Hole  made a bit of a splash on publication – innovative publisher And Other Stories’ first book, it was immediately shortlisted for the Guardian First Book Award and the Oxford-Weidenfeld Translation Prize – so it had been on my radar for a while.

Tochtli lives in a palace. He loves hats, samurai, guillotines and dictionaries, and what he wants more than anything right now is a new pet for his private zoo: a pygmy hippopotamus from Liberia. But Tochtli is a child whose father is a drug baron on the verge of taking over a powerful cartel, and Tochtli is growing up in a luxury hideout that he shares with hit men, prostitutes, dealers, servants and the odd corrupt politician or two.

Down the Rabbit Hole, a masterful and darkly comic first novel, is the chronicle of a delirious journey to grant a child’s wish.

I didn’t think from the blurb that it would be the kind of book I’d enjoy, so I wished it well, but didn’t read it. Then Writers’ Centre Norwich picked it for one of their Summer Reads and I started seeing copies in the library. The discussion event yesterday evening had been on my calendar for a while too. Finally, on Saturday, while taking fils cadet for his weekly library scramble, I picked it up. It’s only short (seventy pages), it would be better to read it before the event… It blew me away.
Tochtli’s voice is just amazing, from the very first lines:

Although he’s living in this corrupt isolation, he sounds like a normal child, albeit one who reads the dictionary before bed every night. He has picked up these long words and uses them gleefully, if not always accurately, for example:

Wearing a hat is a good habit immaculate people have. (p. 4)

As I read the book, I could imagine fils aîné talking that way. The slightly odd choice of words, the repeated insistence on a Liberian pygmy hippopotamus rather than any other kind of hippo, the obsessions, in this case with hats and samurai, are all too familiar. Yet this voice is also casually discussing how many bullets in which part of the body will make a corpse, or the importance of taking off your hat before shooting somebody, or the difficulty of getting blood out of the carpet.  It’s this contrast between the innocence of the child and the violence he considers normal that doesn’t let you go. Tochtli’s world is indeed both sordid and disastrous.

In the discussion yesterday, translator Rosalind Harvey explained that she had read Fiesta en la madriguera (its Spanish title) for New Spanish Books and immediately taken it to Stefan Tobler, who was in the process of setting up And Other Stories, and said: “You have to publish this book.” For her, yet again, it was Tochtli who grabbed her – she described it as like a small child tugging at your sleeve.
I found it interesting that she also said that “disastrous” was the most difficult of the “long words” to translate: in Spanish it is fulminante. Tochtli uses this word in so many ways and so many contexts, often not quite correctly, that she had to find a word that more or less fitted them all and also made it clear that any mistake was his and not hers – a familiar peril of translation. She has managed the trick brilliantly, and the translation reads well – light, yet confident. And did I mention the child’s voice?

The highlights of the evening, though, were Rosalind’s two readings from the book. Although I had found it darkly amusing before, her reading was laugh-out-loud funny. The moderator from the Writers’ Centre (sorry, I never caught your name!) said that for him, the best part was watching people’s faces as they laughed, then wondered if they should be laughing, looked shocked at themselves, slightly guilty and so on. Apparently Villalobos is very pleased that the book has gone down so well in the UK because he always thought it would suit our dark humour.

All in all, it is a book I would thoroughly recommend, and I will also be looking out for more Writers’ Centre events because it was a lot of fun.

I'm a freelance literary translator from German and French to English. The title of my blog comes from Mary Schmich's description of reading: it struck home with me, and seems especially apt for translated fiction. Here are some of my musings on what I'm reading, re-reading, reading to my children, and translating.
View all posts by forwardtranslations →
This entry was posted in Books, Reading, Reviews, Translation and tagged fiction, Guardian First Book Award, Juan Pablo Villalobos, Pygmy hippopotamus, Rabbit Hole, reading, recent reads, recommendations, reviews, Rosalind Harvey, Spanish books, Stefan Tobler, Tochtli, translation. Bookmark the permalink.

3 Responses to Down the Rabbit Hole – Juan Pablo Villalobos