So that’s all right, Best Beloved. Do you see?

Posted on November 5, 2012 by forwardtranslations

Illustration for How the Camel Got His Hump drawn by Rudyard Kipling (1865-1936) for the first edition of his Just So Stories (Photo credit: Wikipedia)

So, the other night, I finally got to read a couple of Kipling’s Just So Stories to fils aîné. I’d been suggesting it for a while without much success, but by dint of just getting the book down and starting reading, he came along to listen.

We read How the Whale Got His Throat and How the Camel Got His Hump. The boys had a point of reference for the stories in Tinga Tinga Tales, but these are so much more enjoyable to read. I discovered them when I was a little older than fils aîné, about 8 or 9, I think, so this was the first time I’d read them aloud. The words just roll off your tongue:

OK, so it has longer words than Tinga Tinga, but isn’t “a man of infinite-resource-and-sagacity” a lovely phrase? And it’s good to expand the boy’s vocabulary…

My copy is a 1964 Macmillan edition, which I got second-hand somewhere back in the dim and distant past. This means that some of the pictures are rather dark, but there is always a long explanation of them to discuss with plenty of detail to look out for. There is also the poem after each story. The one after the Whale, with its cabin portholes, stewards, soup-tureens and Nursey lying on the floor in a heap, dates the stories rather, and is a very different world from anything the boys have come across before, but to me that’s part of the appeal. 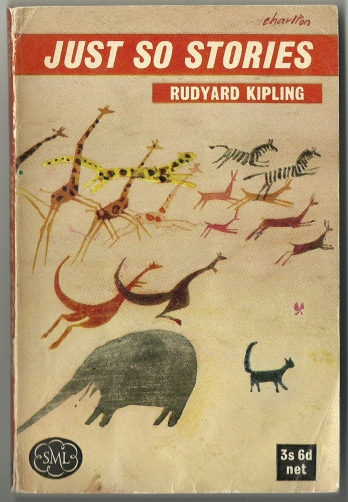 Even the fact that the book has a price of “3s 6d net” on the cover is educational. I hope he’ll let me read him the rest soon.

I'm a freelance literary translator from German and French to English. The title of my blog comes from Mary Schmich's description of reading: it struck home with me, and seems especially apt for translated fiction. Here are some of my musings on what I'm reading, re-reading, reading to my children, and translating.
View all posts by forwardtranslations →
This entry was posted in Uncategorized and tagged children's books, classics, Just So Stories, Kipling, Tinga Tinga Tales. Bookmark the permalink.

2 Responses to So that’s all right, Best Beloved. Do you see?