Translation In The Sun – Guest Post by Rosalind Harvey

Posted on June 9, 2013 by forwardtranslations

I am a literary translator. I spend a large part of my day sitting in front of a screen, grappling (with varying degrees of success) with strange and wonderful words in Spanish and in English, and attempting to perform what has been described as the generous act of transforming the beauty of a text in one language into another kind of beauty in another language. I love it, and most of the time would not have it any other way. However, woman cannot live by literary translation alone… And so, after I finished my three-month residency at London’s Free Word Centre in late 2011, I added another element to my portfolio career (as any of us who don’t have a ‘proper job’ are now obliged to describe our working life). This was *events* – a hitherto terrifying word I mainly associated with gregarious types fond of derring-do, such as, y’know, people who really like people. I don’t actively dislike people, you understand, I just have my fair share of days when the knowledge that my day job involves not really seeing too many of them fills me with love for the world. The non-people part of the world, that is. So I was mildly alarmed to discover that I actually rather enjoyed planning and running events, at least enough not to dissuade me from ever running one again. 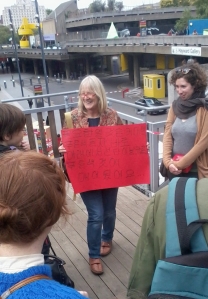 Wordkeys was the most ambitious (read: crazed) and exciting event I had the pleasure of devising for Free Word, and consists of a real-world game about the joys and challenges of translation and foreign languages. Although I couldn’t have predicted this beforehand, happily it functions both as a way for adults who may have left the concept of play far behind in their childhood to get down and dirty with words and strangers (not like that!), and a glorious metaphor for the ways translation and languages can bring people together, as well as for how every translator approaches a text differently yet comes up with a viable solution, utterly different to another’s, equally viable, solution. How so, I hear you ask? Allow me to explain… 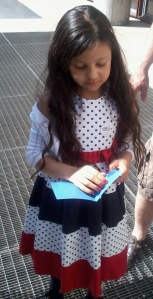 I worked with David Finnigan of brilliant games designers Coney, who was instrumental in the design of the game. I told him I wanted it to involve teams of people moving around an outside space, preferably a market (initially my idea was for it to take place in and around the stalls of Exmouth Market, just around the corner from Free Word’s Farringdon home), and to somehow involve translation. I had a vague image in my mind of people going up to stallholders, persuading purveyors of crêpes and lahmacun to translate cryptic clues directing them to the next stage. He came up with the finer details – the structure, the materials and the brilliant denouement – and not only did it work, but it seems to have legs. After the initial version on Brick Lane, I have now run it at the London Book Fair two years running, at Europe House for two separate groups of schoolchildren (primary and secondary), and again over the recent May bank holiday weekend as part of London Literature Festival at the Southbank Centre. The Southbank version was the biggest and perhaps most fun version yet, due to the sheer scale and the visual qualities of the place – Earls Court has got to be one of the most sterile, dull places on earth, while even on a normal day the Southbank is a feast for ears and eyes. 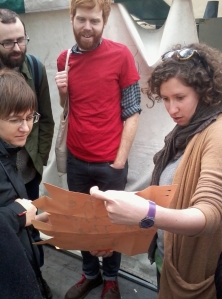 Wordkeys begins with me dividing players into two teams, red and blue, to each of whom I then give a locked box – one red, one blue – a phrasebook containing several clues in foreign languages plus their translations, and an envelope containing a small amount money with the first clue printed on the outside, also in a foreign language. The ‘phrasebooks’ are actually antique travelogues purchased in a Charing Cross bookshop, doctored with the translation of the clues players need to complete the game, plus several ‘dummy phrases’ that serve to distract players, and which I lifted from real phrasebooks – some of the funniest include ‘We got legless,’ ‘Be careful, it’s contagious!’ and (my personal favourite, and surely ever-useful in dodgy Mediterranean nightclubs) ‘Thanks, but I’m with my boyfriend.’ After I explain the rules – no talking to or approaching the other team unless specifically instructed to, and no using smartphones to translate clues (‘or we WILL throw them in the river!’ as one of my brilliant helpers at the Southbank threatened) – the teams set off, using their phrasebooks to figure out what the first clue says. The clues are a combination of directions and just a dash of poetry: ‘climb the yellow stairway to heaven until you see a silver giant’ – in this case, a set of yellow steps leading up to an enormous silvery sculpture by the QEH bar. 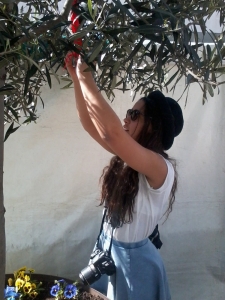 David and I ran the game about four times on its first outing, and every single time, players interpreted our clues differently, which, I have to admit, I found absolutely terrifying. What if they couldn’t figure it out? What if they ‘did it wrong’ or ‘failed’?? I needn’t have worried. At one point players find a clue that is in a language not in their phrasebooks, and so have to use their imagination. They have a number of choices: they can either hold up the clue (written in large letters on a huge piece of coloured card) so that the other team (who by this stage are – hopefully! – more or less visible across the street from them) can read it and translate it using their own phrasebook; they can somehow swap clues, or phrasebooks, using perhaps a willing passerby to ferry the object/s across the market; or they can find a stranger who happens to speak the language their mysterious clue is in and get them to translate it. Depending on the option they go for, they end up with a key that is either for their own locked box or that of the rival team, at which point they either open their own box or have to do another swap, this time of the key. Some teams lob the key across the street, much to the confusion of passersby, others ask bemused tourists to pass it over to the other group, others do a sort of hostage-style swap, laying the keys down on the ground then retreating rapidly. The final stage of the game is my favourite: both teams open their boxes and inside each one finds one half of a large piece of card that has been ripped in half (ie, ‘expertly’ cut by yours truly with a large pair of scissors). When put together, it says ‘Find the other team and form an arch – the game is over when a stranger passes through!’ So although teams have been primed from the start to behave as bloodthirsty rivals, the final instruction they receive now reveals that they must co-operate in order to ‘win’ – if you wanted to assign an educational message to the game, it would be that working together is more productive, co-operation leads to rewards for all, and (more importantly), it doesn’t seem to matter where you are, if a bunch of excitable strangers form an impromptu archway, there will always be a stranger game enough to stroll through it for no apparent reason or remuneration (oh, apart from the drunk guy on Brick Lane who politely demanded a quid in return for staggering through, to gleeful applause). 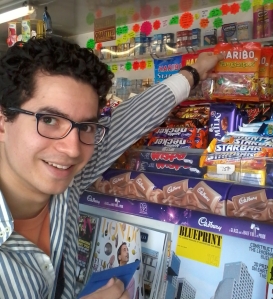 I think this all functions as a rather brilliant metaphor for how literary translators work: we all approach a text from our very different backgrounds, coming up with different solutions to the same initial clue/text, and we all succeed, despite the huge variations in our approaches. There is no ‘right or wrong’ way to do it, and two of the most important aspects of being a translator (subjectivity and playfulness) are also key in this game. Perhaps the scariest (for me!) and yet most enjoyable aspect of the game, which is possibly not applicable to translation, is that failure doesn’t matter – it’s the process that counts. Play has no end goal, no desirable outcome, other than that fun is had. And it certainly was on the Southbank on that sunny weekend. 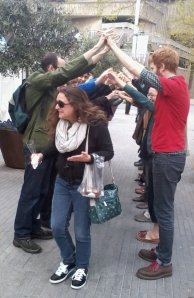 I’ll be running Wordkeys again as part of this year’s European Day of Languages (September 26th this year, although the game will take place on the following Saturday, the 28th) in an around South Kensington, involving various cultural institutes (the Goethe Institute, the Institut Français, the Cervantes), as well as some of the museums and galleries in the area. Follow @Rosenkrantz for updates!

Rosalind Harvey is a translator of Hispanic fiction and runs the occasional translation-related event to stay sane. She tweets as @Rosenkrantz.

I'm a freelance literary translator from German and French to English. The title of my blog comes from Mary Schmich's description of reading: it struck home with me, and seems especially apt for translated fiction. Here are some of my musings on what I'm reading, re-reading, reading to my children, and translating.
View all posts by forwardtranslations →
This entry was posted in blogging, Translation and tagged Blogathon 2013, Brick Lane, Earls Court, Exmouth Market, games, guest post, London, London Book Fair, Rosalind Harvey, Southbank, Southbank Centre, translation, translation game, Wordkeys. Bookmark the permalink.