Posted on October 1, 2014 by forwardtranslations

It’s that time of year again – 30 September is the Feast Day of St Jerome, patron saint of translators and librarians for his efforts translating the Bible into Greek, and now designated International Translation Day. And last Friday was my third year attending the ITD conference, held at the British Library again this year. While the emphasis was, as always, on literary translation, there was much more of a sense of worlds colliding this year with speakers from the ITI and IOL talking about translation matters from a non-literary point of view. There was discussion of continuing professional development, specialisation, professionalism and so on, both in the opening plenary session and in the afternoon seminar I attended with Anne de Freyman MITI and Sarah Patey of SfEP entitled New Directions, which was about commercial translation and proofreading/editing work. Both of them were crammed with good advice.

The other seminar I went to was on translating comics. Although my area of interest is far more in picture books than comics or graphic novels, there is a considerable overlap between them, as emphasised by Sarah Ardizzone, translator of Little Red Hood by Marjolaine Leray and Joann Sfar’s version of The Little Prince. In both there is already often an inbuilt acceptance of collaboration between writer and illustrator as writer, artist and illustrator Daniel Locke pointed out. Similarly, in both the meaning is not contained solely in the words, but also in the images, lettering and the space around them. (This is a good point that I’m storing up for my upcoming Translators in Schools workshop, but more on that once it’s happened!) For an example of how this might work out in practice see Sarah’s account of translating April the Red Goldfish, also by Marjolaine Leray, which she has written about for the Guardian.

The final session of the day followed what seems to have become a tradition of lightening the mood with something fun and dramatic. This time it was on Singing the Meaning: Words and Translation in Opera. Like a lot of people, I went in unsure of what to expect and a little anxious about the idea of being asked to participate. Being blasted with Wagner at the beginning certainly helped to ward off any sleepiness after a long airless day and it was an absolutely fascinating look at a particularly challenging area of translation. If opera lyrics are to be performed in translation, they must not only convey the meaning and fit the rhythm, but they must also have vowels in the right places to be sung and follow the shape of the music – so the important words and dramatic music come together.  Oh, and it also helps if the syntax isn’t tortured into incomprehensibility for reasons of rhyme, and singers prefer not being made to sound ridiculous, apparently… We were given examples of  places where this has worked successfully, and others that are less felicitous. As John Lloyd Davies said, opera translation can be more akin to an infinite and impossible crossword puzzle than to writing a text. It was a great way to round off the day and an unexpected bonus to pick up some tips on singing technique at the same time. 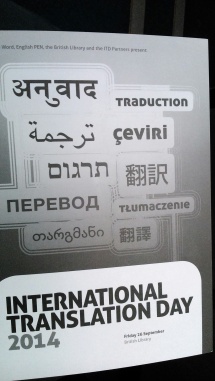 And in between all this, plenty of coffee, sandwiches, a glass of wine at the end – and a chance to meet and mingle with old friends and new. And the walk afterwards was nice even if train times didn’t permit staying to eat Etheopian food. There was much talk of the collaborative and generous nature of the literary translation community. It may be “peculiar” as the multi-hatted Daniel Hahn described it, but it is also rather wonderful and I’m already looking forward to next year.