The Bride of Amman – Q&A with Translator Ruth Ahmedzai Kemp

Posted on June 30, 2015 by forwardtranslations 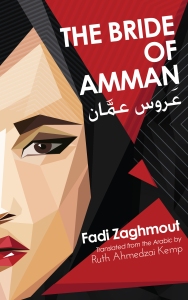 Following my review of Fadi Zaghmout’s The Bride of Amman, I took the chance to catch up with translator Ruth Ahmedzai Kemp for a chat about translating the book.

How did you get involved with the project? Was it something you pitched, or did the publisher come to you?

I picked up the book at Books@ café and bookshop in Amman, as a souvenir of a very memorable trip to Jordan. Soon after reading it, I submitted a chapter about the gay character, Ali, to Words without Borders for their 2013 queer fiction issue. This attracted the attention of Signal 8 Press and having bought the rights, the editor and Fadi asked me to translate the rest of the book.

What attracted you to the book?

Initially it was an impulse buy, one of the few Arabic novels I’ve read with no prior expectations or hype, and I was really taken by it. I was delighted to have the opportunity to translate it as I found it a very enjoyable, compelling read, but fortunately I have a terrible memory for plots so I was still surprised by twists in the story the second time I read it!

What was the most challenging part of the translation?

Hard to say. The biggest challenge was undoubtedly the fact that I started my first draft while on maternity leave with my 6-month-old son! But in terms of the text itself, as there are 5 interwoven first person narratives, it was a challenge to give each character their distinct voice. Also, this was my first translation of a full novel from Arabic and I found I had to develop a strategy to untangle the confusing verb tenses: Arabic doesn’t distinguish as clearly as English between present, past and pluperfect tenses. I’m a very graphic/visual person, so at the start of each chapter I had to draw a timeline marking the perspective from which the character was narrating events: what happened in what order, and what was the distance between events – did they happen that same day or longer ago? Most of my final drafts involved tweaking tenses and temporal adverbs.

Did you enjoy working on the book? What was the most fun?

Yes. I absolutely loved playing around with colloquial expressions, working out what each character was most likely to say on a certain occasion – how formal or relaxed their tone should be, how ironic and cheeky they should sound.

Another part which was hard but which turned into a very satisfying challenge was the song or poem in Salma’s story, where she drifts off to a mantra of voices singing in her head. I’ve always been terrified to translate rhyming verse, but I really got into this one and was pleased with the result – hopefully I’ve captured the same punchy, defiant tone, even if some of the details had to change to make it scan.

There are a lot of cultural references that are less familiar to an English-speaking audience. How did you tackle those?

I was actually relieved that there didn’t seem to be as many challenging terms as there could be! As the title suggests, it’s a story very rooted in Ammani or Jordanian culture. Personally, I love the chance to soak up cultural expressions and local words when I read books from other places, even ones originally in English, so I wanted to retain as many Arabic cultural expressions in as I could get away with. Fadi, our editor and I had a very active 3-way discussion about how to render words like “aroos, the bride, the star of the party” (it is bride, but also fiancé – a name that stays with you from the moment you get engaged) and idiomatic expressions such as “Inshallah, God willing,” and “O’balek. I wish the same for you.” Mostly we have the Arabic and English side by side, as in “George’s mum, Oum George”as that way the reader who doesn’t know any Arabic still has plenty to go on and can learn some Arabic while they’re reading! Especially with o’balek it seemed important to keep the original phrase because it has no equivalent concept in English and is laden with emotional nuance: Salma rails against people wishing it will be her turn next (to get married) because to her it just sounds like criticism that she’s failed to have managed it yet. I love her unconventional response! What’s nice is that it’s not just Arabic and Islamic culture that is conveyed – I got to learn some Circassian and also a bit of Swedish while working on this book!

How do you feel about the issues it raises? What was it like working on a feminist book written by a man?

I have a lot of gay friends and indeed the first weddings I ever went to was a lesbian one, so this novel which is one of the first from the Middle East to champion gay rights is something I’m very proud to be promoting. Fadi has been a wonderful author to work with. I have a lot of respect for him for delving into some tough themes, both in this book and on his blog – topics which few authors from the Middle East have written about. One thing I love about the book is its broad appeal: it’s a novel which on the one hand is light and very easy to read, while at the same time encapsulating some hard-hitting topics, including betrayal, rape and homophobia. Fadi must be a good listener to the women in his life, because he’s captured four very credible, strong young women, all defiant in their own way. The feedback about both the Arabic and now the English version of the novel suggests that the characters’ experiences resonate strongly with a lot of readers, gay and straight, who have lacked a voice in the Middle East and in Muslim culture.

How would you sum the book up in one sentence?
I often describe it as Sex in the City in Amman: a light, entertaining read but with some dark undercurrents. I don’t know if it does it justice but it tends to get people interested. 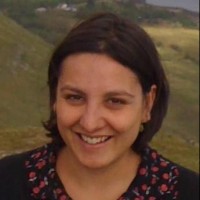 Ruth Ahmedzai Kemp is a British literary translator of Arabic, German, and Russian fiction and non-fiction. She is the co-translator Samar Yazbek’s The Crossing and has translated plays from Russia, Syria, and Lebanon, and several Arabic short stories and children’s books.

Fadi Zaghmout is a social-media specialist, blogger, and author. His first novel The Bride of Amman was published in the Arabic language in Jordan in January 2012, addressing issues of gender and sexuality in the city of Amman. His second novel, Heaven on Earth, was published by prestigious Lebanese press Dar Al Adab in November 2014; it is a work of speculative fiction that posits a near future where science defeats ageing. Fadi holds an MA in Creative Writing and Critical Thinking from the University of Sussex in the UK. He has been an active blogger since 2006 and has a Twitter following of around 370,000.

I'm a freelance literary translator from German and French to English. The title of my blog comes from Mary Schmich's description of reading: it struck home with me, and seems especially apt for translated fiction. Here are some of my musings on what I'm reading, re-reading, reading to my children, and translating.
View all posts by forwardtranslations →
This entry was posted in Books, Reading, Translation and tagged Arabic literature, books, Fadi Zaghmout, fiction, interview, Jordan, literary translation, Q&A, reading, recent reads, recommendations, Ruth Ahmedzai Kemp, The Bride of Amman, translation, translator. Bookmark the permalink.