Marsh Award for Children’s Literature in Translation, and other excitements

Posted on October 21, 2016 by forwardtranslations

So, yesterday, the shortlist for next year’s Marsh Award for Children’s Literature in Translation was announced at an event hosted by the English Speaking Union at Dartmouth House in London’s Mayfair. And as ever, I was mildly surprised by the number of Daimlers and Bentleys that nearly knocked me down on my way there…

The announcement was preceded by a panel discussion chaired by Joy Court (School Library Association) and featuring Gill Evans (Walker Books), Annie Eaton (Penguin Random House) and Sarah Odedina (Pushkin Children’s Books). Although covering a lot of the same ground as many such events – “gatekeepers” getting between children and exciting, international books and making things bland; the difficulties for publishers in finding good books that they can’t read themselves; publishers being “trend-driven” in their acquisitions – there was actually a good deal of positivity and I found it an inspiring occasion. 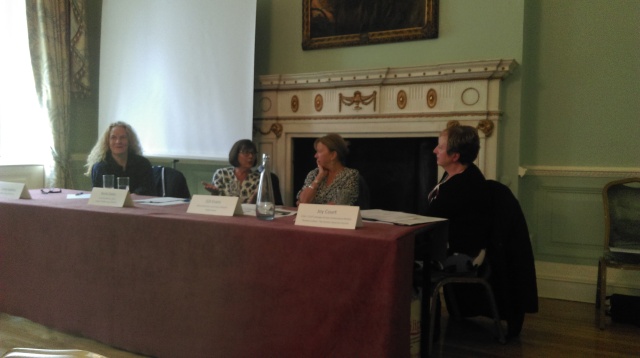 Joy Court pointed out that children are incredibly open to books from around the world, rather than being scared by difference because, after all, everything is new to them. Gill Evans and Sarah Odedina agreed that they were looking for books with an exciting uniqueness to them, that a very specific sense of place would often help a book do better than just being the latest in a long line of, say, vampire stories but just happening to be by a Spanish author… There was agreement that children generally don’t notice whether or not a book is in translation, but can be inspired and intrigued by a “foreign” setting – food seemed to play a key role in children’s books, and two panelists talked about wanting to try the baked cheese in Heidi. Sarah Odedina of Pushkin Children’s ended the talk on a high note, saying that “now is a great time for publishing translations” because as a society we are so much more open and globally connected, and books need to represent this diversity. Given recent depressing political developments in this country, I’m not sure that I share this optimism, but it’s certainly true that we need more than ever to give our children the chance to see beyond our own little island just now.

The shortlist itself was announced by Wendy Cooling, who chaired the judges, and said:

The entries this year were exciting, satisfying, funny and sometimes disturbing reads. In the 20th year of the Award it was exciting to see a very wide range of languages being translated for young British readers. Judging was not work but a real pleasure.

She remarked that this was the “best year ever”, with more languages represented than ever, and that none of the books was plagued by being “too worthy for their own good”. She also said that all six have something that lives on in your head after you have finished reading – always a good sign.

So, <drum roll> the shortlisted books are:

Meanwhile, running alongside the award for the first time, is a children’s book reviewing competition called My Marsh. As well as this, the CILIP Carnegie and Kate Greenaway medal nominations have just been published. These are open to translations for only the second year, but there are 5 on the Carnegie list and 2 on the Greenaway one too. AND… there’s the Book Trust In Other Words initiative aimed at promoting “the translation and UK publication of outstanding children’s literature from around the world.”

So there’s much to be excited about, and much to be looking forward to. Many congratulations to all shortlisted authors, translators and publishers, and here’s to the future of world children’s literature!

I'm a freelance literary translator from German and French to English. The title of my blog comes from Mary Schmich's description of reading: it struck home with me, and seems especially apt for translated fiction. Here are some of my musings on what I'm reading, re-reading, reading to my children, and translating.
View all posts by forwardtranslations →
This entry was posted in Books, Children's Books and tagged Anthea Bell, books, children's books, Children's literature, English Speaking Union, kidlit, Marsh Award, Marsh Award for Children's Literature in Translation, translation. Bookmark the permalink.

1 Response to Marsh Award for Children’s Literature in Translation, and other excitements