Posted on July 16, 2019 by forwardtranslations 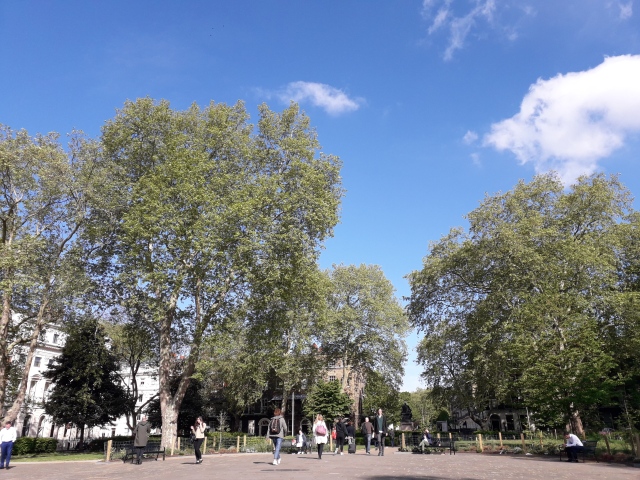 This article first appeared in the ITI German Network’s newsletter and the ITI Bulletin, so sorry if you’ve read it already, but here it is again for anyone else interested…

On 2-3 May, 2019, I was lucky enough to be one of twelve translators taking part in the GINT Translab translation workshop held in the beautiful surroundings of the German Historical Institute in Bloomsbury. The event was focused on academic translation from German to English, organised by Frankfurt Book Fair, Geisteswissenschaften International Frankfurt, the German Historical Institute London, the Goethe-Institut London and New Books in German, and moderated by Dr Ruth Martin, literary and academic translator, and one of the co-chairs of the Translators Association of the Society of Authors. It was open both to experienced translators currently working on academic texts and people at an early stage in their careers or looking to move into academic translation as a specialist area.

To apply, we had either to submit a work-in-progress, or translate a sample text provided by the organisers. After introductions and a warm-up exercise (and coffee, of course), we began by looking at the very challenging text the “emerging” translators had tackled, in a kind of giant, 4-way translation slam. This quickly showed, as these things always do, that no two translators will ever translate any given sentence, never mind an entire text, in exactly the same way. It was fascinating to see the variety of approaches that people had taken to the passage, particularly to ways of breaking up enormous German sentences, or patching short ones together.

During the lunch break, we were also given a whistle-stop tour of the Institute’s library – obviously an enormously valuable research resource. This was also a chance to see some more of the fascinating building (for more on its history, see the 40th Anniversary publication, here). The staircases and ceilings are stunning and make you feel that a Jane Austen lady could appear at any moment… 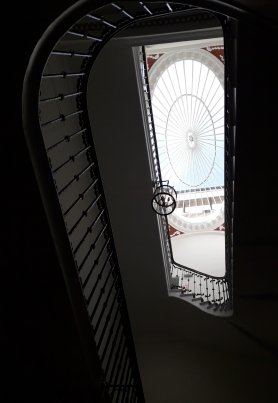 See what I mean about the staircase?

In the afternoon, we looked at the first batch of work-in-progress texts, which covered a wide range of subject areas and threw up a huge array of interesting questions for discussion. These ranged from how to tackle massive concepts that don’t map precisely from one language to the other, such as fremd and all its related terms, to do with “foreignness”, “otherness”, “alienation” etc, to the enormous amount of research work that could potentially arise from a single footnote. We could have talked about each of them for hours but Ruth kept us ably on track.

After tea, there was a panel discussion with GHIL staff, which focused mainly on their experiences of being translated, as well as translating themselves, and of ways that their research related to translation. This highlighted the benefits of establishing a good working relationship with your author as soon as possible, although this is harder if they have been dead for 600 years…

After this, most of us adjourned to our hotel before meeting up again for dinner, where the chatter and discussion continued to flow freely along with good Turkish food and wine (or beer).

The next day, we covered the last batch of texts (including mine). These covered much more similar ground and highlighted the particular challenges of the Second World War and Nazi-era terminology and subject matter – an occupational hazard in academic translation from German. It was extremely useful to be able to discuss resources and approaches to the same perennial questions that we all face, and I’m sure that the connections made during the workshop will continue in the future.

After coffee, we had a round-table discussion of academic translation in general, sharing tips and advice on all kinds of aspects. These included both very practical matters and also the importance of looking after your physical and mental health, particularly when translating the very emotionally demanding texts that come with the territory here. This is an area that the Translators’ Association is planning to consider in general this year.

The final session of the workshop was with Tom Bonnington of Berghahn Books and related to the nuts and bolts of publishing, as well as what happens to our manuscripts once they are submitted, how they select the books for publication and translation and many other areas. 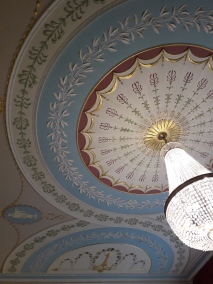 Ceiling and chandelier in the conference room

Thus it was with a tired but buzzing head that I set off back for Norwich and home after a fascinating and inspiring two days, looking forward to applying what I’ve learnt to my work and incorporating some of the brilliant suggestions made by other participants over the workshop.

Many thanks to Anke Simon of the Börsenverein des Deutschen Buchhandels, and Ruth Martin in particular for facilitating the workshop, Emily and Carole from GHIL for hosting and arranging the event, and everyone who was involved. It was marvellous!

I'm a freelance literary translator from German and French to English. The title of my blog comes from Mary Schmich's description of reading: it struck home with me, and seems especially apt for translated fiction. Here are some of my musings on what I'm reading, re-reading, reading to my children, and translating.
View all posts by forwardtranslations →
This entry was posted in Education, Translation and tagged academic translation, CPD, Geisteswissenschaften International, German Historical Institute, GINT Translab, non-fiction, translation, Translators Association. Bookmark the permalink.