Posted on October 7, 2015 by forwardtranslations 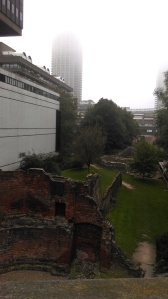 After spending Friday at the British Library for ITD 2015, Saturday was spent at the Museum of London in the company of the ITI German Network for the annual Work and Playshop. Having walked from Liverpool Street, the first challenge of the day was finding the way in – the warren of walkways and absence of doors at street level put me strongly in mind of UEA – but I managed it eventually and was able to get a coffee before the first session.

The morning involved a presentation from GerNetter Laura Byrne on Dragon Naturally Speaking (voice recognition dictation software), which revealed a familiar sounding love-hate relationship with technology, and a talk from Charlotte Ryland, editor of New Books in German about the work they do in promoting German literature in translation.

Then, in the afternoon, came the potentially nerve-wracking part: going head to head with Alison Layland in a translation slam. Less violent than it sounds, this means that we had both translated the same text (in this instance the opening to Winterkartoffelknödel by Rita Falk) and would read out our versions a paragraph at a time, while the audience were invited to comment and ask questions. We were actually up second, though. First of all, Judith Sauerzapf-Christopherson and Isabel Brenner discussed their translations of a Financial Times article entitled David Cameron and the Weaker Sex. It was particularly interesting to see the translation process out of English, given a text that was full of sly humour, irony and very British cultural references and there were a few light bulb moments for those of us who work from German as we saw how phrases travel the other way.

Anyway, getting back to Rita Falk – the book in question is the first in a series of Bavarian krimis, so the text was loaded with dialect and sausage alike. I had read the book a year or two ago, and thought at the time that it would be both fun and extremely challenging to translate. And so it proved. It was fascinating to see where Alison and I had come up with similar solutions, and equally, where we’d gone in completely different directions. Whether or not my attempts to turn Bavarian dialect into non-specific non-standard English were successful, I don’t know. I was afraid it had come out Cockney, but apparently not. Anyway, people seemed to enjoy both our versions and it was a very enjoyable and actually very encouraging experience.

After a quick “any other business”, we adjourned for drinks at Haz St Pauls where we were having dinner later on. When I finally rolled home, I was incredibly full, physically and mentally, and I ended up bailing out of the next day’s walking tour.

It was, as always, good to put faces to names, and to meet in person people I’ve been chatting to via email and social media for some time.

I'm a freelance literary translator from German and French to English. The title of my blog comes from Mary Schmich's description of reading: it struck home with me, and seems especially apt for translated fiction. Here are some of my musings on what I'm reading, re-reading, reading to my children, and translating.
View all posts by forwardtranslations →
This entry was posted in A-Z of Children's Fiction in Translation, Books, Translation and tagged Bavaria, books, CPD, dialect, Dragon, German books, German Network, International Translation Day, ITI, Museum of London, New Books in German, professional development, Provinzkrimi, Rita Falk, translation, translation slam, Wurst. Bookmark the permalink.

5 Responses to ITD and ITI – a whirlwind weekend, part 2